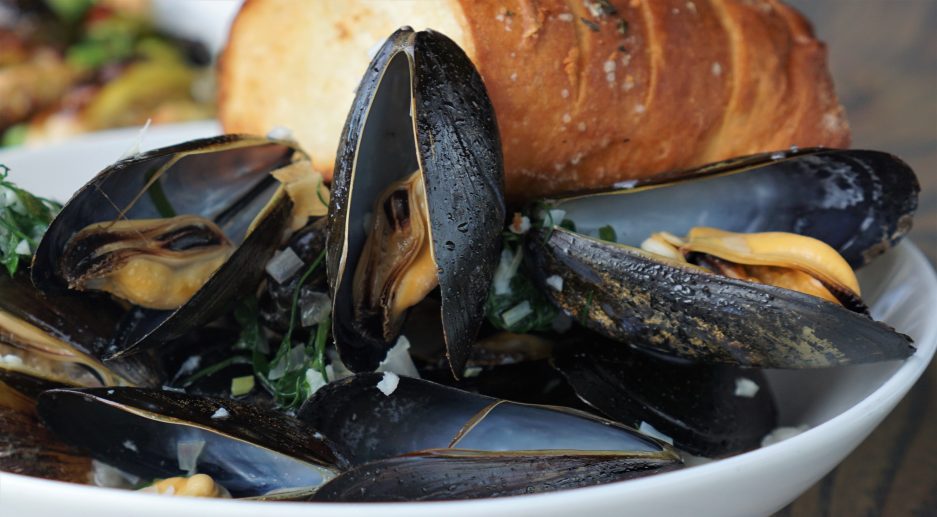 If I ever go missing and there is a need to send out a search party, then Chelsea Market would be a good place to start.  But more about that later….

After another laid back morning taking care of Ling Chao and sipping caffeinated beverages in the comfort of this lovely apartment, we took the short walk over to the 9/11 Memorial.  It was a freezing cold morning and our mood was instantly made somber at this most hallowed and sacred place.  You cannot help but be moved and we certainly were.  Kerry’s reaction was the most emotional as she couldn’t fight back tears the very moment we got there.  And they flowed non stop when we read the notice that the roses placed on names are put there by the 9/11 Foundation folks on the birth dates of those who died.  It’s hard enough to even imagine what it was like on that day, but to have experienced it and lost someone, well…there are no words. 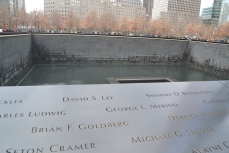 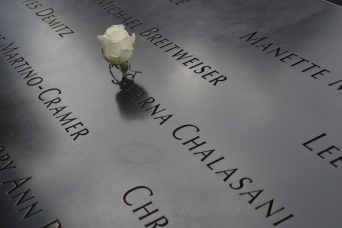 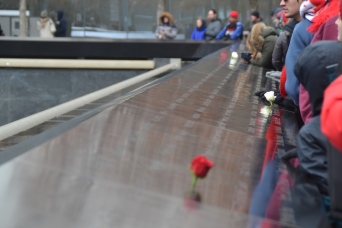 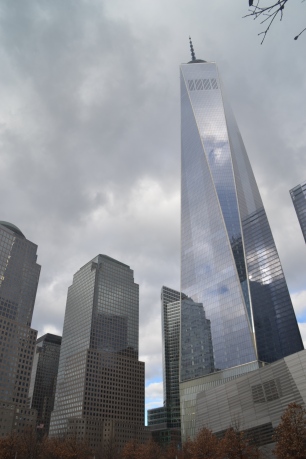 In need of some light relief after a very powerful and emotional visit, we headed around the corner to Century 21, a posh version of Marshalls that had we had unlimited time and means, we could have come away with a LOT of clothes.  An overwhelming store.

It was food time once again and I was on a mission.  I had read about The Lobster Place in Chelsea Market and the restaurant, Cull and Pistol attached to it. Our party are all lovers of oysters and seafood so we were excited to try it out.  We took a taxi there and found yet another interesting driver, originally from Algeria, who was quite the thinker and philosopher.  He gave us pause for thought when at one point he mused “You know, everything has a beginning, you have to start somewhere”.  Not a bad thought for the start of a New Year tomorrow.  We also discussed marriage, he was happily married to a fellow Algerian and said that he had learned to just let her take charge…we shared with him that between the 4 of us ladies, we had 5 marriages behind us so were impressed with his success.  We also discussed the influence and effect of Uber on the taxi system in NYC and he said it has been pretty devastating as we suspected.  Obviously it’s great for the consumer, but it’s great for the city coffers as they receive 10% tax on the fares.  Instead of allowing a comparable number of drivers to the number of taxi drivers, they allowed thousands more which has the affected the income of regular cab drivers in a profound way.  That was his take anyway…he thanked us for picking a cab, we tipped him handsomely which he appreciated and wished him the best for the new year.

Hunger had us walking quickly through the throngs of people in the Market.  I knew I had found just my kind of place.  Multiple gourmet food stores AND Anthropologie under one roof??!  Be still my heart.  When we reached Cull and Pistol we were a bit nervous as there were so many people.  However when the hostess came outside to get our name, she said it would only be a few minutes.  Somehow, magically, a super cozy end booth magically became available and so our $380 lunch began…. we had a fantastic server, a young guy who knew how to deal with us perfectly.   Before long we were sipping delicious Sauvignon Blanc, eating an array of heavenly oysters and sharing a bowl of sublime clam chowder.  After this, we all opted for Lobster Rolls and fries, 3 of us having them warm, Connecticut style, and Cherry opting for the classic Maine Roll.  Naturally, we needed more wine and we savored every sip and morsel of this magical feast.  Definitely a top ten lunch of my lifetime. (Please note that the average lunch doesn’t have to cost that much here…we had great wine and an abundance of food) 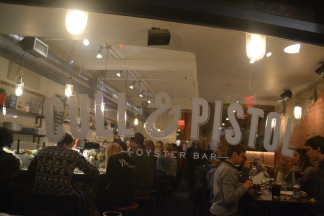 The others waited for me outside while I headed to the restroom, which seems like a completely unnecessary thing to mention except that there was a pair of what appeared to be lobsterman rubber boots in there used as a vase for some decorative reeds.  While the others were outside talking about it, the man who had been sitting at the next table to us, suddenly came up to them and said “the boots were my mother’s”.  Very cool.  They told him that they couldn’t believe that we had managed to score such a great table and he replied “Oh, we knew you were important people”.  Haha, very nice. He owns a great restaurant and the experience from start to finish couldn’t have been better. 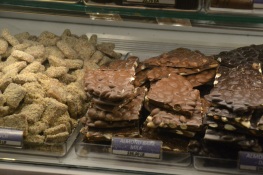 We meandered through the market checking out all the gorgeous stores and Kerry and Robin scored some great tops with tree designs on them.  Stuffed from lunch, it was time to work some of it off by walking the High Line, a former elevated railway line that is now a walking path and garden of sorts that winds through Chelsea and up to the Garment District.  The sun was starting to set and once again there was a lovely glow illuminating the buildings. 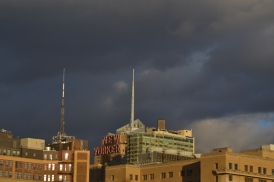 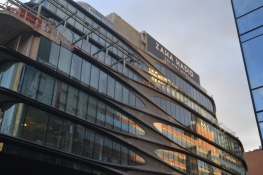 We hopped in a taxi and headed back to the apartment to catch the dwindling light up on the rooftop garden.  In need of some food but not wanting to go out, I headed to the grocery store downstairs but found myself uninspired.  There was talk of Chinese take-out but then I spotted an Indian food truck out of the corner of my eye.  The smell wafted up the street and drew me towards it.  The laminated articles displayed on the side of it told a story of the owner starting as a busboy in Times Square, then working in a food truck then eventually starting his own and expanding to three, all in Downtown.  He was out of their signature Byriani dish however I was able to pick up some Chicken Tikka and a lamb dish along with delicious Kati wraps.  Great food for a freezing cold night and our cheapest meal so far at $24.  Another great day in this city where you can experience so many adventures in just one day. 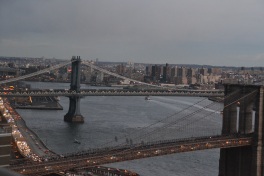 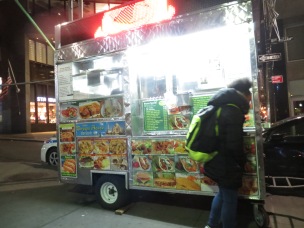 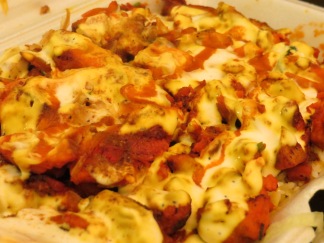