I have great, big boobs.  But I just discovered on Tuesday that lurking inside of my left one, is a malignant tumor.

It seems like it was no mistake that my biopsy results appointment was on the anniversary of D-Day.  As I distracted myself beforehand by posting a tribute on Facebook to my grandfather Hugh, I couldn’t help feeling buoyed by his spirit.  As my eyes stung with tears, I found myself thinking, “if he could survive landing on the beaches on D-Day, surely I can survive whatever is thrown at me today?”

I’m pretty good at coping with big news but walking into a room and being told by a Radiologist,  “Sorry, wish I had better news for you, but it’s cancer” was quite something.  To punish these words, I told him how much the biopsy had hurt, because it really had.  I had to wait 5 whole days for the results of last Thursday’s procedure, which had felt like 5 weeks.  The Nurse Navigator who was also in the room was lovely and had all of the information ready for me and an appointment lined up to see a Breast Surgeon the very next day.  Not sure how much of what she had to say actually registered….I hadn’t taken anyone with me as I wanted to be alone for the result.  She promised they would take good care of me and get me back to normal life as soon as possible.  Armed with Your Guide to Breast Cancer and an envelope of information for the Surgeon I headed back to my car, pretty stunned.

I went and parked under a tree and texted my sister-in-law Heather, whom I had promised would be the first to know.  She has just gone through breast cancer herself and I remember clearly her text when she was diagnosed, “F$&k, it’s Cancer”, and it was my turn to text the same to her.  She was still at the school she teaches at out in Oregon and promised to call me in 15.  I took that time to call Kerry and (friend) Heather who were driving back from the beach.  I think this was the only time I really cried.  Sitting in the parking lot of Johnston Willis Hospital wondering what on earth had just happened.  By the time I got around to talking to the other Heather, I was in better shape.  She talked to me for over an hour including getting me through the drive back home and got me ready to tell my boys and Steve who were waiting at the house.  I was strong and firm in my delivery but the looks on their faces made me want to fold.  I didn’t though and told them that I had no intention of dying, that I didn’t know what stage it was and that I wasn’t sure if I’d lose my hair.  The only big positive thing I could tell them was that it was a slow moving type.  They had highlighted the type in my big book and I couldn’t get past the word “invasive”.  I’m usually a researcher but decided that I would wait.

Instead, I grabbed a glass of wine and called my mother.  Not an easy conversation especially as she’s out West now traveling with my mother-in-law.  “It should be me”, she said in despair.  Then, before I knew it, texts came in from friends with talk of the imminent arrival on the porch of more wine and food, and boy did it flow….until very late that night.  Heather had picked up Saucy’s sandwiches for the boys and then a bunch of the yummy Bowls from Local Vibe Cafe here in Old Towne.  So, so good!  Cindy had arrived too and having just lost her father on Sunday, we both sat on the porch, happy to be served food and wine by the others.  It was a great evening, we have the best damn group of friends you could ask for.

I managed some more texts and emails before calling it a night.  Both boys were late for school the next day and I still struggled to look at the information that had been given to me.  I was supposed to be at The Siegel Center that morning to witness my half-sister Charlie’s High School graduation.  I had been looking forward to celebrating her special day.  My Dad texted me to tell me where they were seated and they had a seat saved.  He then tried to call too but I had to ignore them.  I didn’t want Charlie’s big day ruined by my news, but knew also that they were all wondering why I just wouldn’t show up.  I had a date with the Surgeon. 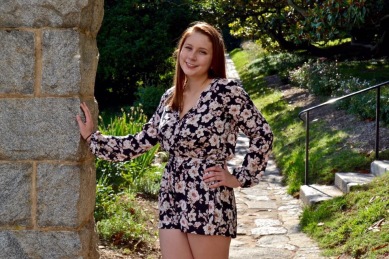 My friend Heather had offered to take me to my appointment and came to pick me up armed with a notebook, cold bottled water and a cheery smile.  We kept the drive up to the hospital light for the most part but I remember saying at one point, “I have two boys, I haven’t been to Morroco yet and what will all the Ladies do without my porch?  I haven’t got time for cancer”.  We laughed when we arrived early….something unheard of for both of us!

We both instantly liked my Surgeon.  The first thing she addressed was my Factor V Leiden issue and the fact that I take Coumadin, a big deal when having surgery.  She has dealt with it before.  Phew.  Then she declared that she had great news for me and unleashed a series of lovely sounding words…..”well behaved lazy tumor”, “it’s growth rate is 5% so it’s really slow moving”, then the really magic words “stage 1” and “this is just a hiccup in your journey and it won’t kill you”.  We took a deep exhale.  Best possible news.  Right now, with the information we have, I’m looking at a lumpectomy and 33 days of radiation.  The MRI results next week along with genetic testing that I’ll undergo could possibly change this course, but for now I’ll take this.  Our love for this Surgeon was confirmed when she said “You guys should go and have a nice late lunch now with a big glass of wine”.

Under Doctor’s orders at this point, we obliged with a delightful lunch on the patio of Tazza.  Wine, an appetizer of delicious bread with warm marinara and goat cheese followed by quiche and tacos was a perfect celebration.  We were quite giddy and had fun texting friends and family with the good news!   Being able to call my boys and tell them was the best because I knew that they had been at school worrying all day.

It was Wednesday so it was Ladies Night anyway, so I found myself on the porch with some of the usual suspects….a much lighter mood this time!  Marie produced yummy homemade barbecue and we enjoyed the cooler evening.  Have I mentioned lately how much I love my friends?!

For the record:  this was caught on my first ever mammogram.  Yes, I was so busy concentrating on my emotional health over the last couple of years that I neglected my physical health to a certain degree.  I kept meaning to have my first mammogram from the age of 40 but it took me four years….not exactly smart given the result.  I would not have found this through self examination either.  It’s ironic that over the years I have helped raise a ton of money for the Virginia Breast Cancer Foundation, firstly attending, then hosting, their annual fundraising dinners.  I have worn a pink ribbon more times than I can count and I even own a scarf and sparkly t-shirt with that symbol.

My forties have proven to be extremely challenging.  Selling the business, the demise of my marriage and now this??!!!  But one thing I’ve learned over the past couple of years is to practice gratitude on a daily basis.  I’m not alone, I’ve joined a club (or two) that I really didn’t want to join, but I am so very lucky in so many ways.  It could have been a worse diagnosis, I could feel lonely, I could not have access to good healthcare…..the list goes on.  Why me?  Why not…. why should I wish this in someone else?  I’ll tell you something, the last 48 hours have shown me how much I am loved and that’s a beautiful and precious thing.

12 thoughts on “A Hiccup in my Journey”