The first restaurant meal I experienced with Ed Dickinson was during the summer of 1993. I was just 20 years old and meeting the couple who would become my parents-in-law 4 years later.  There was a twin lobster special for $15.95 at The Weathervane in Kittery, Maine.  It was the first time I had eaten lobster and where better to do so than in this part of New England, a place that I would grow to adore.  Ed, Polly and Steve patiently and painstakingly instructed me on the art of dismantling this delicious crustacean, making sure I didn’t miss a single part.  Dipped in melted butter, I enjoyed every last mouthful and so began my love for lobster.  Ever since then, whenever I’m in Maine, there is rarely a day when I don’t eat it in some form or another.  Years later our favorite place to go was Chauncey Creek, a delightful place on a dock in Kittery, where you can take your own beer and wine and sit at colorful picnic tables by the water.  We would eventually bring our own kids there. I’m not sure if we ever paid for a single meal there or anywhere for that matter.  Ed loved to take his family out to eat.

Just as he had introduced me to New England cuisine, I in turn introduced he and Polly to my English family which resulted in lots of time eating in pubs, a trip for them to Ireland with my grandfather and even a few days in Paris.  When we opened our own pub here in Petersburg, they were naturally fixtures there when they came to visit, and we finally got to buy them dinner for a change.

Just two weeks ago, the weekend before Thanksgiving, I flew down to Florida where Ed and Polly retired to, and where we have enjoyed countless visits to their home in Cape Canaveral.  This time it was not such a happy visit as Ed was seriously ill in the hospital.  Life can change in an instant. He had been living with multiple forms of cancer for 15 years but it was his kidney that was getting the better of him.  It was never going to be an easy weekend as I knew I may have to say goodbye for the last time.  I was also going to spend 72 hours with Steve after having been separated for over 2 years in an environment with many wonderful shared memories.  What transpired was a weekend that was focused on family, memories, support, and healing.  It was painful, emotional and transformative all at the same time.  I watched as my father-in-law slowly faded but all the while being lucid and aware of what was happening.  The man who had always been a bit of an anxious guy, was suddenly calmer and more peaceful than I had ever known him to be.  I hope he gained comfort from Steve and I being there together despite no longer really being together.  You just can’t erase 23 years of history and we will always be family.

The food in the hospital was in no way appetizing but this man who had always enjoyed eating and drinking, no longer had any appetite.  Steve and I spent time together in the cafeteria when we needed some food, chatting and reminiscing over such delights as buffalo chicken salad, iceberg lettuce and all the fixings from the salad bar, pop tarts and some particularly bad candy.  Here we were, facing losing such a big person in our lives at the same time as coming to terms with how our own lives had changed.

We all have our ways of coping and dealing with a crisis like this.  For some it is to provide a reassuring quiet presence in the hospital room, for others it’s running errands, some simply pray….  Me?  I get cooking.  After a day of eating barely palatable hospital food, I wanted to make sure everyone ate well at home.  For me, food is a source of nourishment, but also joy and comfort.  Cooking for others is an act of love.  I couldn’t cure Ed, but I could make sure there was food in the house for his family.  Heather arrived on Saturday and I picked steak for our dinner with roasted baby potatoes, a salad of field greens, Gorgonzola, caramelized onions, toasted almonds and balsamic vinaigrette. 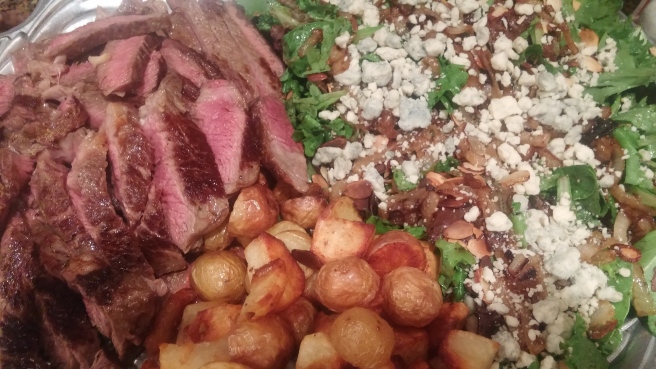 As we ate and drank wine, we chatted and shared the tough realization that Ed was declining and that we were facing the inevitable.  A really hard fact to swallow.

The next day, my last full day, I prepared myself for taking over Polly’s immaculate kitchen in order to cook some meals for the days ahead.  I headed to Publix, the local grocery store which was packed full of people shopping for the upcoming Thanksgiving holiday.  It’s always so surreal to go to a crowded public place when you are going through an intensely emotional and sad time.  It feels like somehow everyone should be sad. But life goes on and the population of Cape Canaveral needed to stock up for their dinners.  As I navigated my way through the crowded aisles, I was suddenly overwhelmed by hearing “Sweet Caroline” playing loudly throughout the store.  I found myself singing along but then memories of times spent watching the Red Sox play on the TV and at Fenway park came flooding back.  I remembered being with Ed and Steve when the Red Sox finally won the World Series for the first time in their lifetimes and it suddenly truly hit me that I was going to cook this food and then go and say goodbye.  I was alone and surrounded by strangers and started to cry.

I managed to get myself together enough to get home but then the tears wouldn’t stop.  I drove to the hospital where Steve came down to meet me in the parking lot and we walked along the perimeter of the hospital grounds, a prime waterside location with a view of the cruise ships at the Port and the Kennedy Space Center in the distance.  It didn’t feel good to be losing my composure, not helpful to everyone else at all, but ultimately a demonstration of how emotional this experience and situation was and a clear indication of how I felt about Ed and his family.  The fresh air helped somewhat and I spent a couple of hours up in the room and down in the cafeteria.  I then decided I needed to go back to the house and start cooking.

The act of chopping, slicing, dicing and seasoning was calming and most therapeutic.  But I continued to cry while I occupied this space where I had cooked before but under entirely different circumstances.  First on the list was dinner for after I had left.  A large Chicken Divan for the refrigerator and a smaller one for the freezer, an easily microwaveable meal that I have made and served countless times and that is always satisfying and comforting especially when reheated.  The other dish, another favorite, Beef in Beer, which was to go in the freezer. 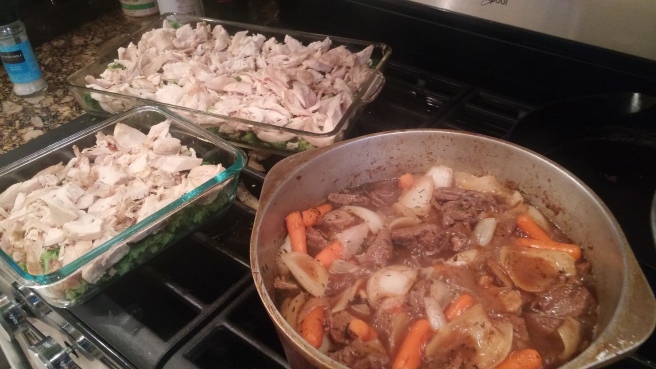 I had somehow instinctively chosen to make “Cheesey Potatoes” for that night’s dinner, one of Ed’s favorites.  Thinly sliced potatoes layered with just heavy whipping cream, sharp cheddar cheese, salt and pepper then baked in the oven for about an hour.  Pure comfort in a casserole dish.  It was to accompany Roasted Pork Tenderloin with Caramelized Apples, Pears and Onions served with green beans.  It was served again on a platter I gave Polly a few years ago.  I love serving dinner family-style on a platter as I think firstly, it looks good, and secondly, it contributes to the feeling of a truly shared experience, creating a connection between everyone around the table.

With dinner prepared for each of the coming days, I went to the hospital where the room was darkened and Ed was resting peacefully with Polly, Steve and Heather by his side.  A number of close friends and family had come to visit so he was surely tired.  He insisted that he be woken up every time someone left so that he could say goodbye.  After the shift changed, it was time to go and it was my turn.  Needless to say it was hard, a tender exchange which I will always cherish.  We all left the room feeling highly emotional, of course.  It’s truly a gift to get to say a final goodbye to someone, especially someone like Ed.

It was sort of fitting that this all happened around Thanksgiving, the holiday that was introduced to me by Ed and Polly.  I have so many memories of this holiday spent around their table in York, Maine.  We always marveled at Polly’s ability to produce the entire feast without ever messing up the kitchen, something I will NEVER master.  I remember fondly offering to help do something my first year there and being asked to peel the squash for the Dickinson classic dish of mashed butternut squash with maple syrup and butter.  I loved the dish but have since avoided the peeling over the years by splitting it in half and baking and scooping instead of dicing and boiling it.   I attempted a Polly Dickinson Thanksgiving dinner in Petersburg, once, I believe?!  Silly me….what was I thinking?  When it comes to food, sometimes it’s best just to take the spirit of the occasion and try to carry it on.

So this year, I returned home to my boys in time for the holiday, and our 15 guests.  I was feeling deeply anxious about Ed’s failing health, not being with them all, but especially grateful to be around the table with many special people.  We carried on the traditions of love, good food, family and gratitude.  We didn’t walk the beach at Long Sands in between dinner and pie like many years past, instead we walked the Centre Hill Circle and then went around the table all saying what we were thankful for.  Ed featured an awful lot.  It’s remarkable how particularly important the simple traditions and rituals of life become at a time like this. 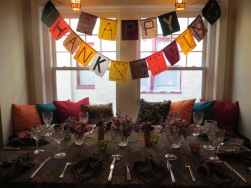 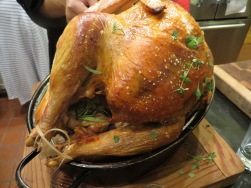 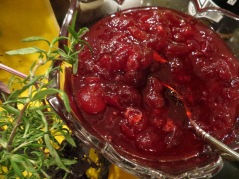 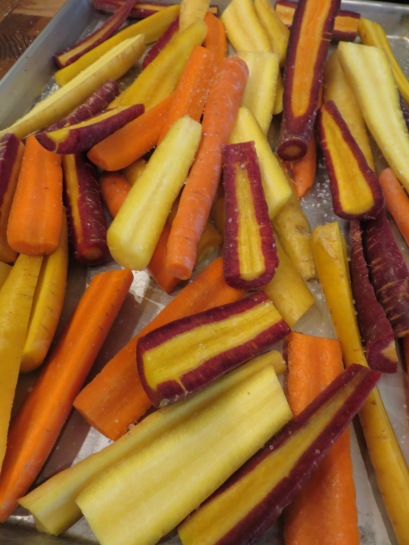 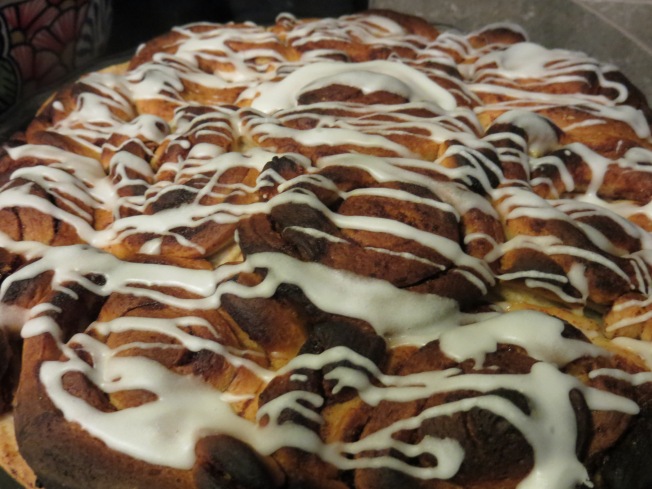 I texted this picture to Steve, Heather and Polly when I made the butternut squash the night before:

I will always think of them when I make this every year.

Ed spent Thanksgiving at home, surrounded by family.  Not the usual fanfare, but the place he loved with those he loved, most of all, Polly.  Two days later on Saturday 26th November, he peacefully passed on to his next adventure with Polly and Steve by his side.  Steve called to tell me just as I was heading out to go to the Model train exhibition at the Science Museum, another Thanksgiving tradition.  I didn’t cancel our outing, it was yet another lovely ritual and therefore comforting.

Thank you for your kindness, wisdom and generosity, Ed.  Thank you for treating me like I really was your daughter.  Thank you for all the lobster dinners.  Thanks for always having Stoli and Schweppes or Fever Tree tonic in the house when I came to visit, even though you really only liked Absolut and generic brands of diet tonic.  Thanks for so generously and enthusiastically showing my English family around in both New England and Florida.  I think they even liked it when you forced a shot of Jagermeister on them at the end of the night.